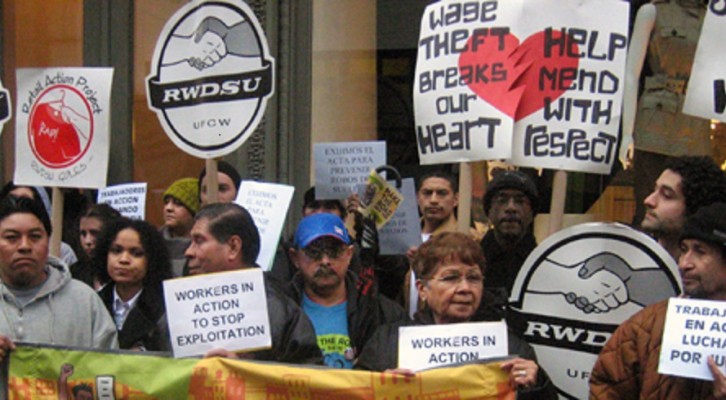 PHOTO: A new report says wage theft is robbing millions of New Yorkers of billions of dollars. Advocates say communities with large populations of immigrant workers such as New York City and Long Island are ripe for this fraud. Courtesy: Make the Road New York.

NEW YORK – A new report says millions of New Yorkers are being ripped off every day by companies that cheat them out of wages and other benefits they should be earning.

Kate Hamaji is a research associate at the Center for Popular Democracy, which issued the report.

She says they found companies are cheating workers by a variety of methods including failing to pay minimum wage or overtime, denying benefits, making illegal deductions and even telling them to work off the clock.

“We estimated 2.1 million New Yorkers are victims of wage theft annually and cheated out of a cumulative $3.2 billion in wages and benefits they are owed,” says Hamaji.

The report, “By a Thousand Cuts: The Complex Face of Wage Theft in New York,” identified 11 companies they call “bad actors” who they say engage in particularly egregious behavior.

An asbestos removal company named in the report, did work at Wheatly High School on Long Island and also on major projects in New York City. Meg Fosque, low-wage organizing director with Make the Road New York, says the company engaged in wage theft for at least six years and eventually paid more than $100 million in fines and restitution.

“But, what’s really significant about this case is, even while they were being sued by hundreds of their employees for wage theft, they continued to commit wage theft,” says Fosque. “They ended up being debarred in Nassau County, and they are also debarred in New York City from working on public contracts.”

Fosque says the state’s Wage Theft Prevention Act of 2010 is one of the strongest in the nation, but she says it needs to be more aggressively enforced, particularly in areas with a large immigrant workforce such as Long Island and New York City.

You can learn the names of all 11 companies identified, and more about wage theft in the report which is posted at the Center’s website.