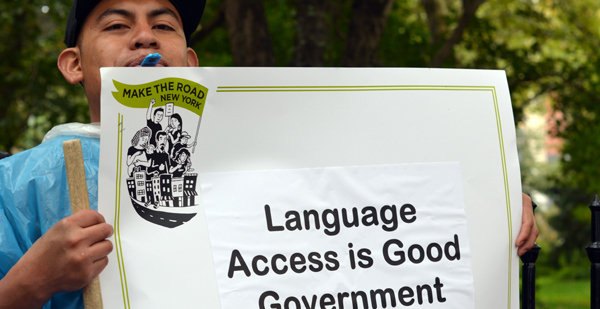 Yesterday, Long Island’s Nassau County Executive Ed Mangano signed the second of two Executive Orders (EO 67 and EO 72) that requires all County agencies to provide translation and interpretation, ensuring equal access to services for more than 130,000 Long Islanders who are not yet proficient in English.

This makes Nassau County one of the first suburban counties in the U.S. to enact such a comprehensive language access policy, and it follows closely on the heels of a similar Executive Order we won with our allies in Suffolk County last year. We embrace this new policy, which welcomes and values all residents regardless of the country from which they hail and the language that they speak.

The Executive Order is the direct result of work done by Make the Road New York, the Long Island Civic Engagement Table (the coalition we created with allies to increase civic participation among working-class people of color on Long Island), New York Lawyers for the Public Interest, the Long Island Language Advocates Coalition, the Center for Popular Democracy, the NYCLU, Jobs with Justice, SEPA Mujer and La Fuente-Long Island Civic Participation Project.

Under the provisions of the Order, all County agencies will:

Thank you to our members and supporters for working with us to stand up for the rights and needs of immigrants everywhere.