On September 8, workers at Hi-Tek Carwash & Lube in East Elmhurst, Queens voted overwhelmingly to join the Retail, Wholesale and Department Store Union. This is the first time any car wash east of L.A. has voted to unionize, and it’s a historic moment for all 5,000 car wash workers in New York City.

With Saturday’s vote, employees at Hi-Tek are sending a clear message to exploitative employers citywide, that workers will no longer stay silent in the face of abuse, wage theft, and retaliation.

Read more about this major breakthrough in the New York Times.

For over six months, MRNY, along with our partners in the “WASH New York” campaign, New York Communities for Change, have been helping car wash workers across the city to speak out and stand up against the gross labor violations rife in this notorious industry. The Hi-Tek workers have been leaders of the WASH-NY campaign and are also being represented by MRNY’s legal team in a major federal wage and hour lawsuit.

One of the best ways for workers to make changes at their workplace and to win a real voice on the job is to form a union — and MRNY is committed to supporting the Hi-Tek employees as they work to win a contract guaranteeing them fair wages and dignity on the job. 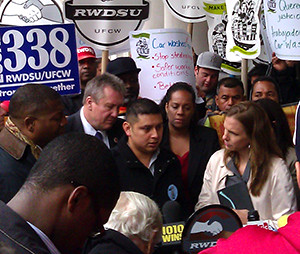 Recently, we surveyed car wash workers citywide and found that two-thirds of employees received less than the minimum wage. The vast majority worked at least 60 hours a week, with some working as much as 105 hours a week, but a whopping 75% of them didn’t receive the overtime pay they were due. [Read the report]

To top it all off, car wash employees every day are exposed to harsh chemicals and frequently must work without the needed safety equipment. Can you imagine going to work in these conditions?

Although workers at Hi-Tek faced serious personal risks in coming forward about their mistreatment, the conditions were so bad that workers felt they could no longer remain in the shadows. Many who have spoken out at other car washes have received retaliation in the form of threats, hours cut and reduced wages. When you are a low-wage or immigrant worker, retaliation like this can be particularly harmful to you and your family.

In this light, the move by Hi-Tek workers to unionize is profoundly courageous. We commend them for their determination to stand up for what they — and all of us — deserve: respect and dignity on the job.