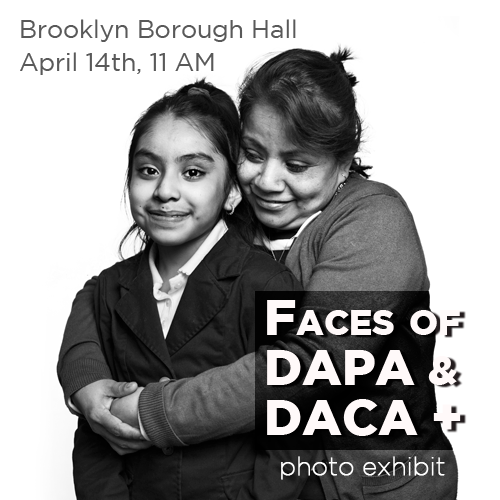 The Supreme Court is about to hear arguments about President Obama’s DAPA/DACA+ initiative. The Court’s decision will deeply impact five millions immigrants across the U.S.

To honor these immigrants and highlight their personal struggles, we’re launching a photo exhibit in partnership with the office of Brooklyn Borough President Eric L. Adams called “Faces of DAPA and DACA+.”

Join us for the exhibit launch!

The exhibit is in Brooklyn Borough Hall and will open to the public at 11 a.m. on April 14th.

Among those immigrants featured are a mother working to support children in her home country, a student struggling to pay school tuition and a father of US citizen children. If DAPA/DACA+ is implemented, all would be able to live free from fear of family separation and gain work authorization that would give them a shot at a decent job.

MRNY is committed to building a better future for the immigrants living in our neighborhoods and across the U.S. We are sending a loud message from our community: We need DAPA and DACA+ now!