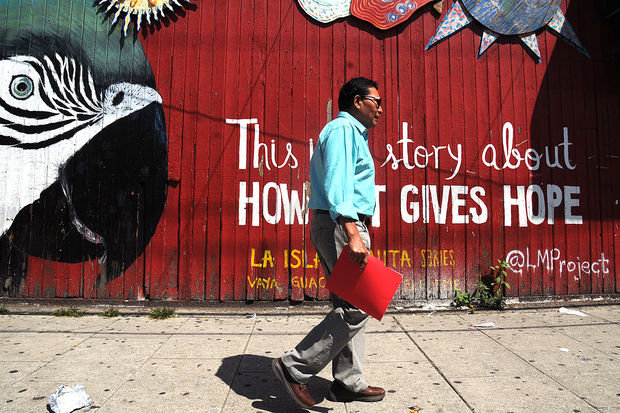 The organizer at Make the Road New York runs workshops in which undocumented Staten Islanders can learn about their rights and consult with attorneys on hand. He’s also created a text message chain of watchful residents to warn of immigration raids, as well as collecting vital information from some undocumented residents in case they’re suddenly detained and separated from their children.

“You give tools to people so they know how to defend themselves, what to do or where to turn,” Lopez said in Spanish.

On a recent morning, Lopez pounded the Port Richmond pavement, stopping in at a bodega, a hair salon, a restaurant and a tortilla factory, distributing fliers about an upcoming workshop and asking local business owners to help get the word out with their clientele.

“Sales have gone down, people have already left for Mexico, lots of friends decided it would be better to go because they’re afraid of this,” said Julian Cruz, 42, in Spanish, who owns a Mexican restaurant in Port Richmond, and who agreed to lay out fliers on the counter of his establishment.

Lopez moved to the United States in 1986 from Puebla, Mexico, working in the food-service industry for 12 years until falling victim to a common crime among restaurant workers — wage theft.

He heard about Make the Road through the attorneys who helped him and his co-workers sue the restaurant for their wages.

“I felt very indebted to the organization,” said Lopez, who volunteered for four years and became an employee after a 10-month training course in 2010.

Lopez said Trump should “go into the community, look at the people who are working 10 hours, 12 hours, sometimes they don’t pay them. These are the people that are contributing to the country.”

With the president’s rhetoric about immigrants, stepped-up immigration enforcement and the threat of repealing DACA, Lopez feels like residents should prepare themselves the same way they would for a hurricane or other natural disaster.