They call it the “rip-off” clause.

New York lawmakers and worker advocates rallied in midtown Manhattan on May 18 to protest the practice of forced arbitration by large corporations, which they said exploits low-income workers and consumers.

In forced arbitration, a company requires a worker or costumer to agree up front to resolve any problem through an arbitration process, waiving their right to go to court. This severely limits the recourse workers have if the company commits fraud, wage theft, discrimination or other abuse. 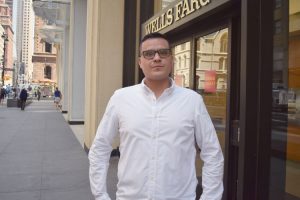 Advocates slammed this practice as the “rip-off clause,” stating that most workers are forced to sign paperwork at time of hire, waiving their legal rights.

The group staged its rally outside of a Wells Fargo branch on Madison Avenue, and criticized the bank for forcing victims of its 2016 account scandal, in which Wells Fargo opened millions of deposit and credit card accounts without customer permission, to resolve claims against the bank through arbitration. 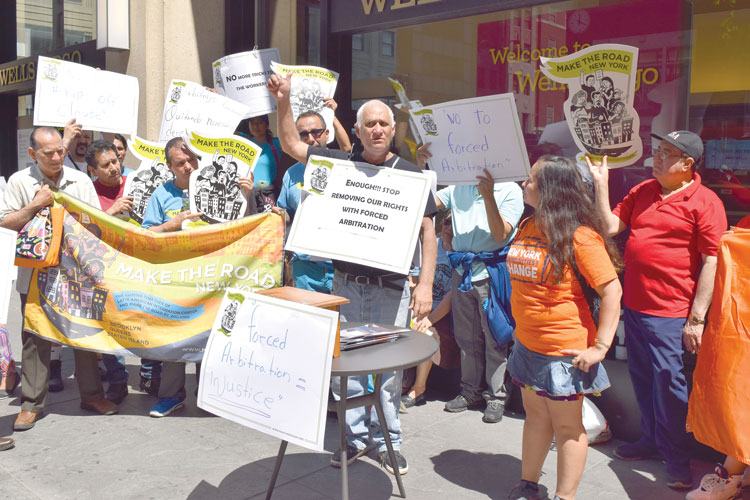 Deborah Axt, Co-Director of Make the Road New York (MRNY), explained that most workers, many of them immigrants who might have limited understanding of English, are not even aware of what they are signing. 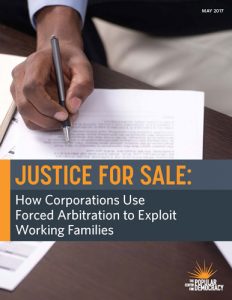 “You never even think twice, you certainly don’t understand the fine print, nor do you have an option of not signing,” remarked Axt. “You need the job, or you need the credit card, you’re going to sign it. And then something terrible happens. And then when you find an attorney, you find that you have no meaningful path to enforce your rights.”

Joyner, Kavanagh and Hoylman announced that they will introduce state legislation to would extend the reach of public enforcement of worker and consumer protections.

The EmPIRE (Empowering People in Rights Enforcement) Worker Protection Act would seek to extend the reach of public enforcement of worker and consumer protections, in an effort to account for the fact that forced arbitration is decimating workers’ and consumers’ ability to access the courts in the face of wage theft, discrimination, fraud and exploitation.

“It will allow people to enforce their private right to labor dispute,” said Joyner. “This will give them access to the courts, rather than only have their case in front of an arbitrator.” 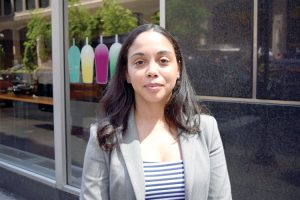 “We have to do everything we can to protect workers,” said Assemblymember Latoya Joyner.

“It’s important to remember that the arbiter is usually someone who is selected by the company,” said James.

Worker Danny said he was hired by Macy’s in Douglaston, Queens and worked as a sales associate for more than six months, earning recognition for job performance.

However, he said he was abruptly fired, with Macy’s stating that he was terminated due to a prior conviction seven years earlier. 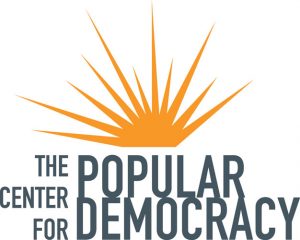 “I divulged all of that when I was hired, yet they allowed me to work there for over six months,” said Danny, who explained that he sought help from an attorney, but was unable to take Macy’s to court for discrimination.

“I hadn’t known that when I went for the job, I signed a forced arbitration agreement, which I had no idea about,” he said.

“Forced arbitration needs to be stopped,” he added. “This leaves the average worker pretty much screwed. My quest to find a meaningful job, I thought I had found it, and it was taken away from me.”

“We have to do everything we can at this point to protect workers,” Joyner said. “The state has done many advancements such as paid family leave, raising the minimum wage, but if we’re denying people their right in court, I think we’re doing an even greater disservice.” 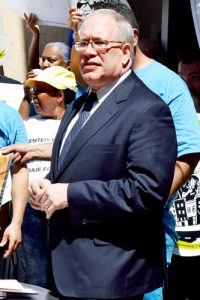 “We’ve got to expose the people who are not good advocates,” said City Comptroller Scott Stringer.

Cavanaugh said that consumers are exploited by forced arbitration as much as employees.

“This issue is not just an issue with employment contracts,” he said. “The time you are most likely to sign a forced arbitration agreement is when you’re buying goods or services in this state.”

The group staged its rally outside of a Wells Fargo branch on Madison Avenue, and criticized the bank for forcing victims of its 2016 account scandal, in which Wells Fargo opened millions of deposit and credit card accounts without customer permission, to resolve claims against the bank through arbitration.

“We’ve got to expose the people who are not good advocates,” Stringer remarked. “The best antidote to bad corporate practice is a strong legislative agenda.”

In response to the protest, Wells Fargo issued the following statement: “Our number one priority is to make things right for our customers. Arbitration is a fair, efficient and effective forum available for a customer to pursue a legal claim and resolve a legal dispute through an impartial third-party. Arbitration clauses are commonly included in customer agreements at financial institutions and businesses in other industries, and offer benefits to both the business and the consumer. By resolving legal disputes through arbitration, both the consumer and the business have the ability to reach a positive resolution at a lower cost.”

The protest coincided with the release of report by the Center for Popular Democracy, titled Justice for Sale: How Corporations Use Forced Arbitration Agreements to Exploit Working Families, which stated that workers in forced arbitration cases win only about 20 percent of the time, with median damage awards of around $36,500, compared to $176,000 in federal court employment discrimination cases and $85,600 in state court. 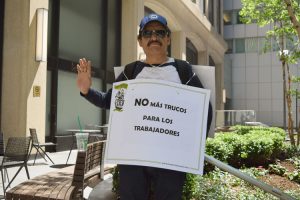 The report also indicated that in cases related to credit card opening, consumers win arbitration cases only about 6 percent of the time.

“This [new] legislation is critical to be able to boost the reach of the public enforcement,” said Axt. “We’re not letting bad actor corporations and employers get away with murder just because they’re convinced their consumers and employers to sign away their rights to go to court.”