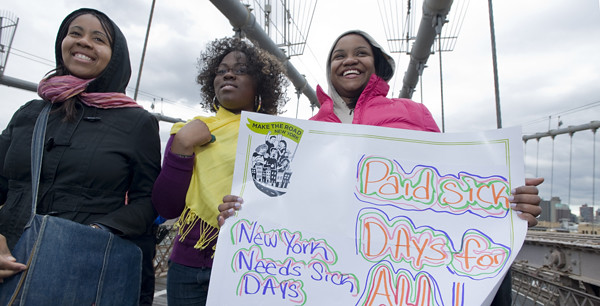 We are thrilled to announce a major victory for workplace justice and public health in New York City. Today, lawmakers reached an historic agreement to give more than 1 million New Yorkers the right to take a paid day off work to care for themselves or a sick family member. New York City is now the largest city in the U.S. to enact paid sick days legislation.

Starting in April, 2014, the new law will protect all workers from being fired for taking a sick day. The law provides workers whose jobs have 20 or more employees with 5 paid sick days; in October, 2015 the law will expand to cover workplaces with 15 employees. Workers at smaller businesses will be able to take unpaid sick days without fear of being fired. (Read more in the NY Times.)

This incredible victory belongs to the hundreds of individual and small business members of MRNY who have shown great leadership and courage in coming forward with their stories and, through tireless advocacy with our partners at the Center for Popular Democracy, the Working Families Party, and the NYC Paid Sick Days Coalition, have helped bring national attention to the need for paid sick leave.

We know that without paid sick days, workers are incredibly vulnerable. For a low-wage worker, taking off even a single day without pay can mean the loss of critical income. For parents, this can mean the impossible choice between caring for a sick child or having enough money to feed that child.

It can also mean losing one’s job. Over the course of this campaign, hundreds of low-wage workers have come forward after being fired for having to take a sick day — some were even fired for going to the hospital after getting sick or injured while on the job.

Paid sick days are basic workplace rights. But they are also critical to protecting public health. Without a legal mandate, employers in service industries have little motivation to provide paid sick days. If the choice for a food service worker is to stay home unpaid, or go into work sick and possibly contaminate a customer’s food, workers at the bottom rung of our economy will almost always have to go to work sick.

Paid sick days are essential to keep New York running, and we applaud Speaker Christine Quinn, Council Member Gale Brewer and Julissa Ferreras for their work to come to this game-changing deal.

We look forward to working together to ensure that one day soon all workers in New York have paid sick leave.