More than 30 immigrants and immigrant advocates demonstrated on Manhattans
Upper East Side on Wednesday to protest U.S. Secretary of Homeland Security
Janet Napolitano as she visited the Council on Foreign Relations. Napolitano was
in New York to
announce a new strategy to involve individuals in the fight against
terrorism.

The demonstration, which ended with a press conference, is one of the most
visible signs to date of immigrant advocates growing frustration over the Obama
administrations immigration policies.

By the end of this year, we hope he (President Obama) will have much more to
show. He has to switch from talking to actions. Right now, statements are
positives and actions are negative. There is a big gap, said the director of
the New York Immigration Coalition (NYIC), Chung-Wha Hong.

Specifically, advocates took issue with Napolitanos expansion of the 287(g)
program, which deputizes local police officers to enforce federal immigration
laws, and the expansion of e-Verify, a data-base system to check the eligibility
of people to work lawfully in the US.

We hope she takes our criticism seriously and will talk to us about how to
reverse course and stop that discredited and ineffectual enforcement tactic of
the Bush years, and start taking steps towards comprehensive reform legislation
 not more of the same, but change that is needed for Americas workers,
businesses, and families.

Hong said Napolitanos office has not responded to a request for a meeting
with immigrant advocates.

So far, ICE [Immigration and Customs Enforcement] has not made any
substantial changes, said Daniel Cuates, community organizer for Make the Road
New York, one of the groups that participated in the protest. We are here to
tell Napolitano that we need reforms that dont tear families apart and dont
criminalize people who are not criminals.

Last November, we voted for real change, but all we are seeing is more of
the same when it comes to immigration enforcement policies. Our communities are
suffering tremendously, Sandy Placido, a community organizer with the Northern
Manhattan Coalition for Immigrants Rights, said in a press release. 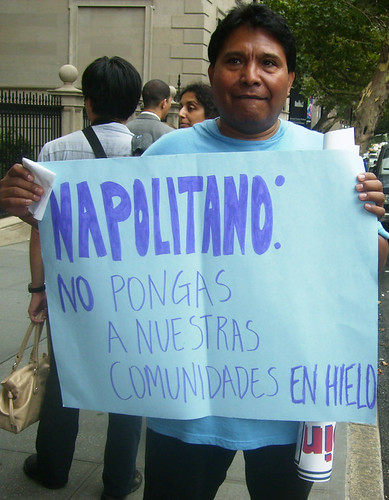 We want to remind the President that we voted for him. We come here to work.
Our work helps the economy and we deserve a path to legalization, said Saúl
Sánchez, a resident of Queens who is a member of Make the Road New York.

The press conference was mainly attended by community media and foreign press
including EFE,
a Spanish-language news service that serves Hispanic media in the U.S., Latin
America and Spain.