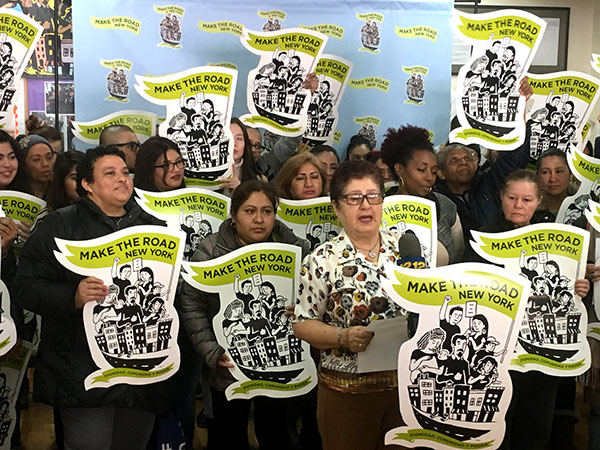 Sixteen years ago, my daughter was about to give birth, and I knew she needed my help to take care of my new grandchild. So I came to the United States. I have now been here for 16 years, and I have six grandchildren. We are Americans through and through.

I’ve worked hard to educate and support my family. But we’re now in a moment when we’re under attack from Donald Trump’s administration—it’s the worst political moment that immigrant communities like mine have faced since I arrived in 2001. But we’re here to stay, and we’re not going anywhere.

Since Trump’s election, my community has faced the fear of a newly-elected strongman who has pledged to tear our families apart. We have responded not by hiding in the shadows, but by showing our resilience. We have gone to Know Your Rights workshops. We have spoken with our families and our neighbors to prepare ourselves. And we have taken to the streets to protest.

What we have yet to see, however, is strong action from New York State to show us that our state government has our backs. And that’s why last week I joined other members of Make the Road New York to introduce our Immigrant Opportunity Agenda—a platform for Albany’s leaders to show that they really stand with immigrants.

Our undocumented families are suffering from the president’s attacks and attempts to separate us, which cause fear and pain. That’s why our New York platform calls for Governor Cuomo and the State Senate to pass the New York Liberty Act—which has already passed the State Assembly—to keep families together and keep all New Yorkers safe. The Liberty Act limits cooperation between state and local agencies and federal immigration enforcement, and it prevents sharing of information about our immigration status. This bill would help my family feel relief and support from our state government.

Meanwhile, the statewide expansion of another program, the New York Immigrant Family Unity Project, would make sure that all immigrants facing deportation would have access to a lawyer. For families at risk of being torn apart, having a lawyer can be the difference between a mother like me seeing my child again—or being sent off to a country that I no longer know.

The Immigrant Opportunity Agenda also calls for driver’s licenses for all, which is so important for families like mine. Twelve other states have access to licenses for all, regardless of immigration status. Particularly in areas with little public transportation, immigrant New Yorkers often have to drive to get to work or drop their kids off at school. Everyone should have access to licenses, which will help protect our families and make our roads safer.

To make sure that immigrant families enjoy the opportunities we deserve—and that we get our fair share of the billions we pay in New York State taxes—the Immigrant Opportunity Agenda also includes the DREAM Act, to ensure equal access to college for all of our youth, and increased funding for adult education. And it demands that New York step up for workers by cracking down on wage theft, one of the key ways that immigrant workers continue to be exploited.

The governor has said he stands with immigrants. But neither he nor the State Senate—whose Republican leaders have mostly endorsed Trump’s agenda— has yet pushed legislation or significant budget items to protect our community and ensure our access to opportunity.

It’s not too late. The Immigrant Opportunity Agenda shows how New York can ensure that we are all protected from attacks by President Trump and New York politicians who have embraced Trumpism. Now, more than ever, we need Albany leaders to show whose side they’re on.

***
Magdalena Brito is a member of Make the Road New York. On Twitter: @maketheroadny.