Taken From Us Action

—Shoes! Immigrant New Yorkers held pairs of shoes on the steps of the New York Public Library on Fifth Ave. in Manhattan on Wednesday. Then they carried them to JPMorgan Chase’s headquarters. Geraldo Rivera originally from Mexico, lives in the Bronx. He says “the shoes represent another member of our community in jail thanks to JP Morgan and others who finance private prisons.”

The “Taken From Us” protest was organized by Make the Road New York. The group says JPMorgan Chase and other banks are profiting off of GEO Group and Core Civic. Geo Group provides services on behalf of the Federal Bureau of Prisons, U.S. Marshals Service, and U.S. Immigration and Customs Enforcement and Core Civic, formerly the Corrections Corporation of America, owns and operates private prisons and detention centers.

Protesters delivered 27,000 letters and petition signatures to JPMorgan Chase. The signatures and letters from across the U.S. demand that the company stop financing private detention centers and stop backing the Trump agenda.

JPMorgan Chase is one of the companies recently exposed by the “Corporate Backers of Hate” campaign, which has exposed how nine major corporations stand to profit off of Trump’s anti-immigrant, anti-Muslim, anti-refugee, and anti-worker agenda. 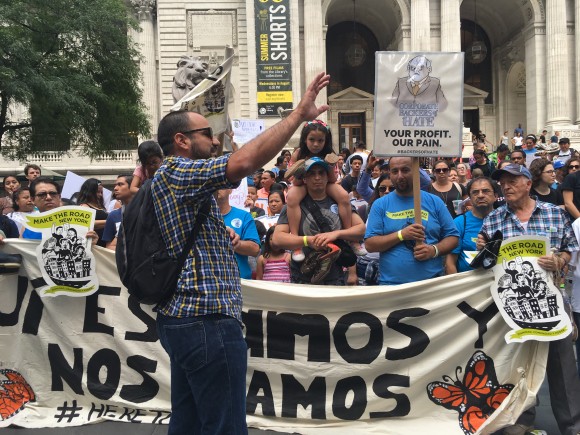