Updates from the Youth Power Project 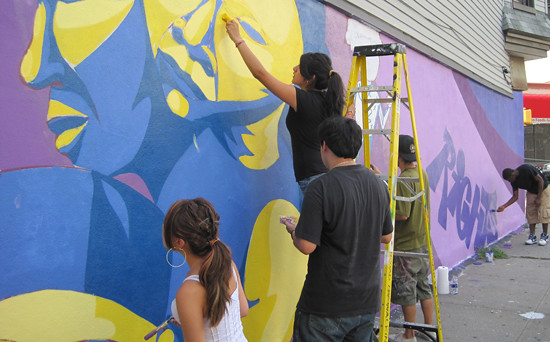 YPP members paint a mural on Menehan Street in Bushwick.

BSSJ STUDENT RECEIVES REMARKABLE ACHIEVEMENT AWARD
This spring, MRNYs youth leader, Eric Murray-Datcher, 19, was honored with a Remarkable Achievement Award by the New York City Department of Education in a ceremony with Schools Chancellor Dennis Walcott. Eric graduated last month from the Bushwick School for Social Justice, a Make the Road New York partner school, and has worked as a youth leader in the MRNY piloted Student Success Center (SSC) for a year and a half.

Eric received a special award for overcoming adversity to graduate high school. Despite an extraordinary set of obstacles, Eric’s academic and athletic success at school and in the community has led him to be the first in his family to make college a part of his future plans.  He will be starting at Alfred State this fall.

"I don’t want to be another statistic, Eric said. I want to become a social worker because don’t want any child to feel how I felt.

And Eric wont be the only one heading off to campus through his work at MRNY’s Bushwick Student Success Center, he has motivated and helped dozens of his peers apply for and enroll in college.

Emilia Wiles, who directs the Bushwick SSC, said, Eric has been an instrumental part of a youth-led college prep movement of Student Success Centers that started with Make the Roads Bushwick center, and has now been replicated throughout the city.

Because of dedicated youth leaders like Eric, who help their fellow students navigate the application and financial aid process, the program is reaching thousands of students in three boroughs, increasing both graduation and college acceptance rates. Read more about this program here.

Students like Guadalupe Gracida have not only excelled in school, but have also worked hard to establish opportunities for other immigrant youth by advocating for the passage of the DREAM Act.

This first graduating class is an extraordinarily hard working group of young people who have made remarkable achievements. Congratulations to the Class of 2011 and their families!

This year, members from all four of MRNYs community centers will participate in the Action Summer, writing newspaper articles for our Word on the Street youth newspaper; creating and performing poetry; and painting Know Your Rights murals. They will also collaborate to design a portable museum installation that illuminates our communities experiences with detrimental Stop and Frisk policing policies, for a five borough exhibition tour beginning in the fall.

As part of the National Campaign for Quality Education, participants will also help to build the national support base by collecting endorsements from thousands of students, teachers, parents and community members nationwide, and showing our leaders that our countrys schools need equitable resources and opportunities for young people. Check out this great video from our Washington D.C. action in May.