Workers: Firm fired us after Day Without Immigrants protest 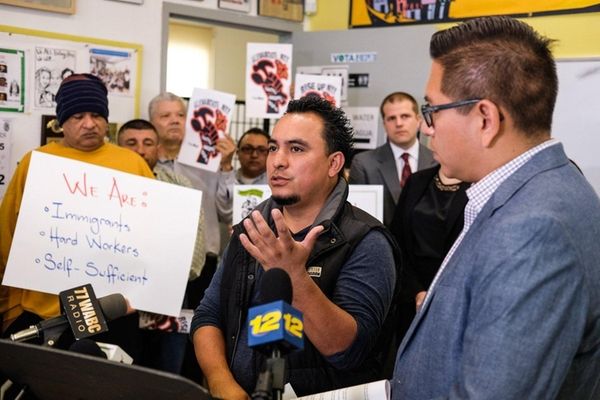 Juan Barahona, of Hempstead, left, says he was fired by his employer after he participated in the Feb. 16 “A Day Without Immigrants” protest. He speaks in Spanish with translation help from Walter Barrientos, of the advocacy group Make the Road New York, during a news conference in Brentwood on Tuesday, April 18, 2017. (Credit: Steve Pfost)

Some immigrant workers on Long Island said the protest in February dubbed “A Day Without Immigrants” turned into days without jobs, after a Melville distribution and warehousing company fired them for missing work.

Three workers made the claim against the International Warehouse Group in a labor rights charge filed with the National Labor Relations Board. In a separate but related legal action, they are seeking unpaid wages in a lawsuit in State Supreme Court in Nassau County.

They said they worked at the business, which describes itself as “a full-service distribution and warehousing company,” preparing merchandise for delivery for large retail chains.

Two of the workers, Erik Ríos and Juan Barahona, said Tuesday at a Brentwood news conference that they were warned not to join the Feb. 16 protest and were fired the day after they skipped work to support the demonstration. The third worker, Melbi Morales, was not at the news conference.

Company president Jay Joel, in an emailed statement, said, “International Warehouse Group has no knowledge of any person who worked at our facility who was terminated for participating in the Day Without Immigrants.”

The protest stemmed from a social media campaign that encouraged immigrants to miss work and school and refrain from shopping on that day to assert their rights against stricter immigration enforcement measures under President Donald Trump.

“I participated in a Day Without Immigrants to let this country know our worth as Hispanics here,” said Erik Ríos, 32, a Hempstead resident, speaking in Spanish.

The next day, he said, a manager asked workers in the warehouse to raise their hands if they had been to work. Those who didn’t were fired on the spot, Ríos said.

Ríos also said that immigrants at his job site were treated badly: limited to three-minute bathroom breaks, scolded if they stayed a lunch even a minute over the allotted time, or fired if they stopped to rest. “We weren’t treated fairly,” he said.

Elizabeth Sprotzer, an attorney for the immigrant advocacy group Make The Road New York, said the workers were exercising their right “to engage in protected concerted activities.”

The workers are represented by the group, which has a Brentwood office, and the Shulman Kessler law firm in Melville.

“We are doing this to remind immigrants and to encourage immigrants to stand up for their rights whether it’s in the workplace or in our communities,” said Walter Barrientos, Long Island organizer for Make The Road. “We are also here to send a strong message to employers . . . that immigrants are not going to be standing silent” against abuses.

The charge — as cases brought before the labor board are known — maintains that, in letting go the workers, the company violated law provisions against retaliatory termination, unlawful interrogation and threatening discharge. The state suit, which seeks class status, claims unpaid and insufficient wages and other violations.

The workers’ immigration statuses or national origins were not disclosed, as their lawyers said they were not relevant to the claims.

Juan Barahona, another worker, said the firing was humiliating and he struggled to find work to support his two children.

“I was very frustrated that because I’m Latino and I went to the protest I would be fired,” said Barahona, 33, of Hempstead, speaking in Spanish. “All we wanted was to defend our rights.”

The National Labor Relations Board, which oversees cases concerning unfair labor practices, confirmed its regional office had received the charge document, but did not comment on the case.

Each charge is investigated and referred to a regional director, with cases typically decided within seven to 12 weeks. Cases in which there is no settlement move on to hearings before administrative law judges.