This April, Globe  Make the Road New Yorks LGBT group  organized a Community Forum in response to the brutal murder of José Sucuzhañay, an Ecuadorian man who had lived and worked in New York for ten years. 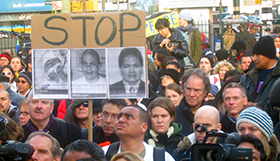 José and his brother Romel were walking through Bushwick, Brooklyn one night last December, when a group of men attacked them on the street, beating them with a metal bat and shouting anti-gay and anti-Latino slurs. Romel was able to survive, but Josés injuries were too grave; he fell into a coma and died in the hospital five days later.

This horrendous crime shocked the neighborhood and spurred substantial community action. A week after the attack, MRNY brought hundreds of community members together for a rally and vigil to remember Josés life and to bring citywide attention to the terrible consequences of unchecked hate and violence. Community members demanded action from law enforcement and from elected officials, who promised to take steps to prevent more LGBT- and Latino-related hate crimes. 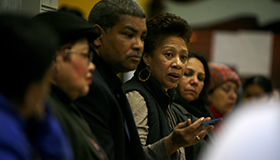 At the April Community Forum, Globe organizers sought to address the devastating impact hate crimes have on a neighborhood. The 82 forum attendees focused on pinpointing the origins of hate crimes and devised several solutions to help victimized communities protect themselves.

Hate crimes have a disproportionate effect on minorities. City leaders have portrayed New York as a haven of tolerance, but during the forum, many people expressed a fear of being targeted themselves. This fear is understandable, pointed out Globe organizer Karina Claudio. Demographic changes in neighborhoods always produce tensions among different groups. Crimes against the LGBT (Lesbian, Gay, Bisexual and Transgender) community have risen even as organized LGBT groups have made great strides in their struggle for respect and equality.

Participants in the discussion demanded more effective protection from the police, who, according to Karina, often fail to correctly categorize bigoted attacks as hate crimes. In response to the NYPDs shortcomings, community members proposed the creation of a new law enforcement agency specially trained to respond to hate crimes with a phone line designated for reporting these incidents.

Since 80 percent of hate crimes nationwide are committed by young people between the ages of 18 and 26, the forum participants also proposed increasing cultural education and emphasizing respect for diversity in school curricula.

Participants, including some of José Sucuzhañays relatives, noted that the campaign to spread tolerance should be extended even to criminals serving time in prison for hate crimes. They argued that these individuals could still undergo a moral transformation.

Karina emphasized one of the most important lessons of the forum. We are all together in this, she said. No group should be excluded from the fight for better conditions for the poor and oppressed.