Flake gets a firsthand look at rage about Kavanaugh

Two tearful women cornered Flake as he got on an elevator Friday, pleading for him to reconsider his support for the appeals court judge who’s been accused of sexual assault when he was a teenager. By the end of the day, Flake had, adding a condition to his promise to vote for Kavanaugh. He’d do so, Flake said, if the vote was delayed a week so the FBI could investigate “credible allegations” against the nominee.

It wasn’t clear that the raw, emotional elevator exchange changed Flake’s his mind by itself. But it’s hard to forget. And Flake didn’t deny it was one of the factors that made an impression.

“Look at me and tell me that it doesn’t matter what happened to me,” said 23-year-old Maria Gallagher.

Ana Maria Archila pointed her finger at Flake while she appeared to keep the elevator door from closing.

“On Monday, I stood in front of your office,” Archila, co-executive director of the nonprofit Center for Popular Democracy Action, told Flake. “I told the story of my sexual assault. I told it because I recognized in Dr. Ford’s story that she is telling the truth. What you are doing is allowing someone who actually violated a woman to sit on the Supreme Court.” 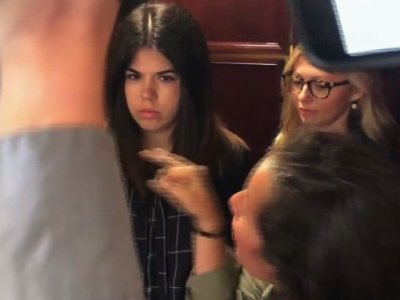 Two women cornered U.S. Sen. Jeff Flake in an elevator Friday, moments after he announced he would vote to confirm Brett Kavanaugh to the Supreme Court as emotions ran high in the U.S. Capitol. (Sept. 28)

Flake said he had to go to a hearing.

He was returning to the committee room where he and 20 colleagues had heard hours of testimony Thursday from Christine Blasey Ford, a California psychology professor who told them Kavanaugh sexually assaulted her decades ago. Kavanaugh strongly denied the allegation.

Flake had lobbied Republican leaders to give Ford the chance to speak. He was viewed as a possible “no” vote on the panel and in the closely-divided Senate — until his morning announcement Friday.

That made the two women staking out his office angry, and they confronted him when he tried to leave for Friday’s hearing.

“I was sexually assaulted and nobody believed me. I didn’t tell anyone, and you’re telling all women that they don’t matter, that they should just stay quiet because if they tell you what happened to them you are going to ignore them,” Gallagher said.

“That’s what happened to me, and that’s what you are telling all women in America, that they don’t matter,” she said through tears.

She begged Flake to look her in the eye. “Don’t look away from me,” she said.

Flake, cornered in the elevator, shifted between looking at them and looking down. He said, “Thank you,” but didn’t response to questions on whether he believed Ford’s testimony.

Later in the day, Flake voted to advance Kavanaugh’s nomination from the committee to the full Senate, but only after announcing his condition.

He said he had been speaking with Democrats to make sure “we do due diligence here.”

Flake was later asked whether the elevator confrontation swayed him.

“I can say this whole process has affected all of us,” he said. “I can’t pinpoint anything to say this is what caused me to come today to say let’s postpone.”

He said it was “remarkable” the number of people who saw Ford and “were emboldened to come out and say what had happened to them. I’ve heard from close friends and I had no idea. That’s important.”

President Donald Trump later agreed to order the FBI to open a supplemental background investigation into Kavanaugh that would be completed in a week.

The women do not identify themselves in the video, but Archila’s group sent a press release following the confrontation confirming it was Archila speaking on camera. Gallagher confirmed via phone to The Associated Press that it was her, and she consented to the use of her name.

The AP does not usually name people who say they are victims of sexual assault unless they come forward publicly about the allegations, as these women have done.

Speaking to the AP by phone after the confrontation, Gallagher said she didn’t intend to tell Flake about her assault — she had never told anyone before. “But I saw him, and I got really angry,” she said.

She was in town as a volunteer with the liberal activist group Make the Road New York.

Archila told the AP she was sexually assaulted when she was 5 years old by a teenager when she and her family lived in Colombia. She said she didn’t tell anyone before this week.

“I had planned to just talk to him nicely, but once when I saw that he was voting for Kavanaugh my niceties went out the window,” she said. “What are you doing to our country? You are sending the wrong message you’re saying that all of us who put our pain to the world to confront don’t matter.”

After hearing about Flake’s request, she said the sequence of events suggested their conversation helped move him.

“What it tells me is that telling our stories and showing up can actually change their minds,” she said.