Braving more than a foot of snow, on December 20, fifty Make the Road New York members joined with workers, the Retail, Wholesale and Department Store Union, community groups and elected officials to call for improved wages at the Queens Center Mall and released a report exposing the mall as a publicly-subsidized poverty wage center. 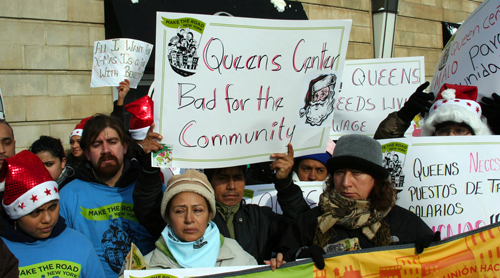 Despite the fact that the mall’s owner, the Macerich Company, has already received more than $48 million in tax breaks and will receive more than $50 million over the next few years, most of the 3,100 jobs at the Mall are low-wage, no-benefit jobs. Despite massive public subsidies, the Mall’s workforce is so poorly paid that they have to rely on government subsidized health insurance and other government aid. Download the full report here.

At the press conference and rally, MRNY was joined by City Council Members Daniel Dromm and Julissa Ferreras and Assemblymember Jose Peralta to launch a campaign to require Mall retailers to pay a living wage with benefits, respect their employees’ right to organize a union without threat or intimidation, and secure space to provide much needed community services. MRNY is also working on legislation to require permanent living wage jobs as a condition of receiving development subsidies. Read about this event in the Daily News.

"Living wages for workers at the Queens Center Mall will mean that families don’t have to choose between paying the rent and buying groceries," said MRNY member and Queens resident Omar Noboa. "Jobs with benefits will mean fewer working families that will have to rely on public programs such as Medicaid." 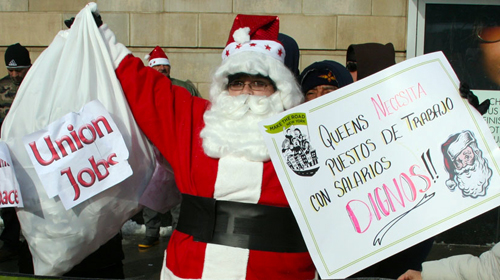