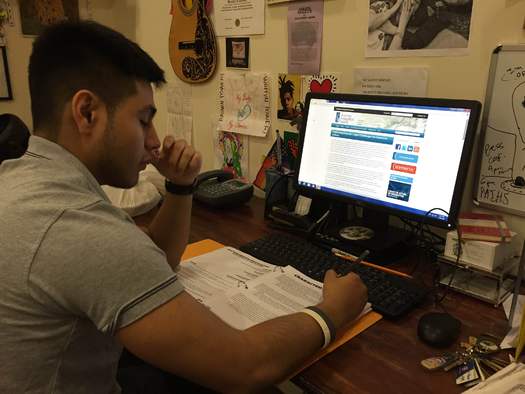 JACKSON HEIGHTS, N.Y. – An undocumented New York student is one of many cheering the Supreme Court decision to hear a high-stakes immigration case. Jonathan Jimenez was born in Ecuador and came to New York in 2000 when he was five years old.

He is now legally attending Queens College, because he was granted relief from deportation under the DACA program, which stands for Deferred Action for Childhood Arrivals. He is hopeful the Supreme Court will uphold President Obama’s action that expanded the DACA program.

“DACA has opened a lot of doors for me, going into school and also going into the workforce,” says Jimenez. “I’m able to get a driver’s license and also to have an ID. In our community, New Yorkers need to have IDs.”

The Obama administration is appealing a case that was brought by Texas and 25 other states that argues that President Obama exceeded his authority by providing relief to an entire class of people.

Jimenez says he especially hopes the court will uphold the president’s executive action when it comes to the DAPA program, which could provide relief to as many as 4 million undocumented immigrants. He says DAPA would help both his parents, who have been hard-working undocumented members of his community for 16 years.

Jimenez also is on the board of Make the Road New York, which notes President Obama’s actions are based on “extensive legal authority.” In what some are calling an unusual move, the high court, in accepting the case, also opened the door for lawyers to argue whether Obama exceeded his executive authority.