MRNY is pushing back against skyrocketing rents and deteriorating housing conditions in Sandy affected areas, organizing as hard as we can to ensure that renters can afford to stay in their own communities.We are helping low-income homeowners to negotiate with mortgage lenders, reclaim payments from unscrupulous contractors and get their fair share from insurance companies and government agencies. And at the city level, we are also working to channel resources to eradicate mold from thousands Sandy-damaged homes. Read stories from our affected community members working together for change: 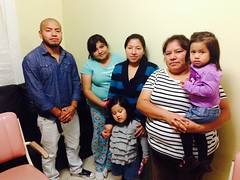 Flor, originally from Mexico, has lived in Staten Island with her family for 17 years. She cleaned houses to support her three children and pay their $1,100 monthly rent. Sandy destroyed her house, as well as the houses of her employers, leaving her without work and without a home. Her new place, which Flor shares with six other family members, costs $1,600 a month — a steep $500 increase.  MRNY workforce specialists helped Flor find cleaning work with a new employer, which is helping her pay the rent.
Listen to more of Flor’s story on NPR’s Latino USA… 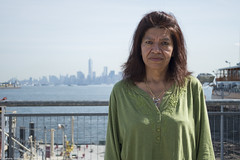 Working people are feeling the pressure of rising rents in Sandy-affected areas. Maria Raquel Sanchez is one of them. An undocumented immigrant from Mexico, she’s lived in Staten Island for 24 years. After the storm, she and her family – which includes a total of four adults, a baby and her five-year-old grandson, Richie – moved to a new apartment in the same neighborhood. Their new house is a smaller two bedroom bungalow and the rent is $500 higher.  The crowding and financial strain is taking its toll: Maria wants to stay in Midland Beach but fears that the tension caused by overcrowding and the financial strain will soon force her to a new neighborhood, or even to return to her home country. She’s organizing with MRNY for policy solutions, including expanding a rent voucher program.
Read more about Maria Raquel’s story in The Daily News…

Sandy flooded 70,000 homes in New York City. Mold – a trigger of asthma and other health problems – infested many of them. When one of our immigrant outreach workers met Veronica in May she was living with her husband and two young children in a mold-infested rental home. Thanks to the new protocol that MRNY helped establish, the outreach worker was able to help Veronica register her home for the city’s mold remediation program — even though she is a renter. The city contacted her landlord, and the mold was successfully remediated.
Read more about MRNY’s work to eliminate toxic mold…

Small Grants to Families in Need 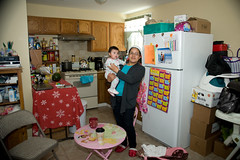 Sandy wiped out 30,000 jobs in the New York City area, making it even harder for working people to keep their housing. Carmen, originally from Colombia, lost her job as a housekeeper in Oceanside, Long Island when her employer’s home was damaged by Sandy. Unable to afford her rent, she and her two teenage daughters moved out of their home in Westbury. They were unable to find affordable accommodations for the entire family. Carmen stayed in a room in the home of a former employer while her daughters rented rooms with friends. With the help of Make the Road New York’s grant program, established in the immediate aftermath of the storm, Carmen was able to reunite with her daughters in a new apartment.
Read more about our work to help renters…